On the book cover~Eddie Trusted,an English schoolteacher in Colombo,wants to spend his life with Menaka Rupasinghe,a vibrant Sri Lankan beauty,but as with all matters of the heart,there;s an obstacle.If Eddie wants to wed Menaka,it is Thilak Rupasinghe,her orthodox terror of a father,whom he must woo and whose farts he must kiss-Thilak wants his daughter to marry someone of the same race,religion and caste,and if possible from the same locality.
In a desperate bid to make a dream a reality,Eddie tries to connect with Thilak in other ways-eating curries that make him bleed spice and breathe fire,driving drunk through red lights,threatening co-workers with violence,and sleeping with snakes.But will Eddie ever be good enough for a man who hates the colour of his skin?
Sparkling with with and featuring an endearing cast of characters,The Amazing Racist is the story of a man who finds a home among strangers,of a father-in-law whose bark is worse than his bite,and of bonds that grow to be stronger than family ties. 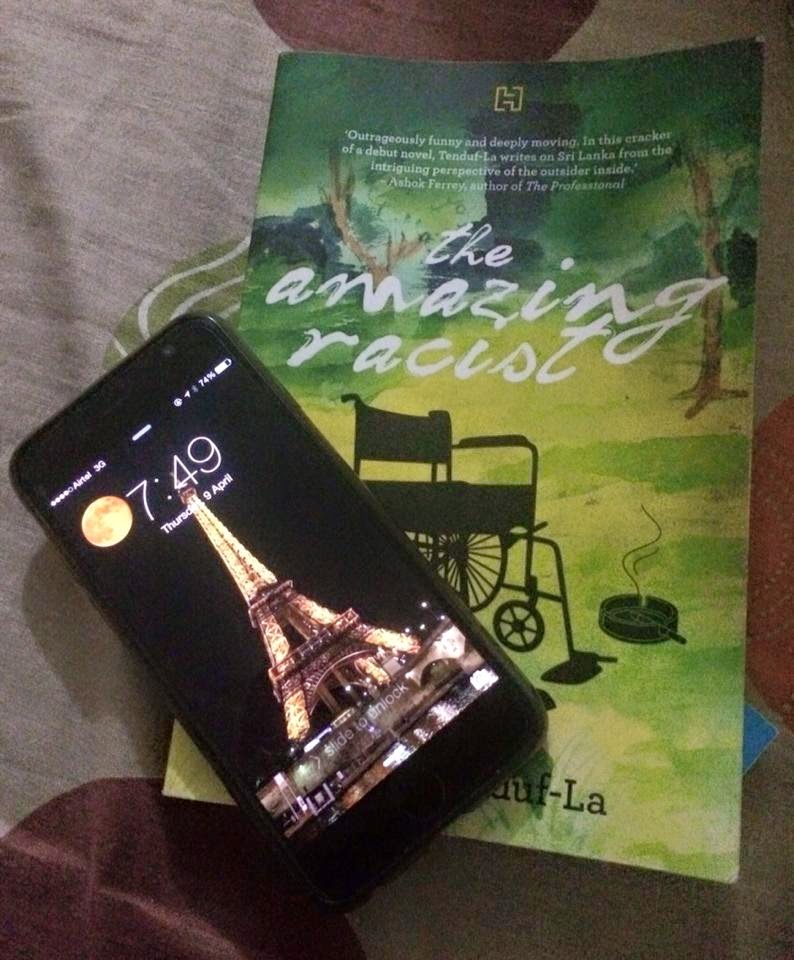 Its a story of Eddie Trusted,an English Schoolteacher in Colombo falls in love with Menaka Rupasinghe,a vibrant Sri Lankan beauty.He finds her glistening green of her eyes really attarctive and is also in love with the milk tea color of her skin.She is in love with him too and after dating for she weeks and six days,she takes him to meet her father Thilak Rupasinghe.Eddie was nervous and had fear before meeting him.Menaka tells her father that she wants to settle down with him.mr.Rupasinghe was against her decision as Eddie was white.Eddie was teacher so Mr.Rupasinghe had doubt whether he would be able to support her daughter's lifestyle.

Mr.Rupasinghe was weak from his cancer.he got a cancer five years ago but he beat it,while still drinking,smoking and playing golf.Doctors had to cut the growth of his neck.In all,he had twelve operations and a great deal of chemotherapy.It shows that this man was really strong.

Eddie was ready to do anything to marry Menaka and he was also ready to do anything to change Mr.Rupasinghe's mind.Menaka was stubborn girl so her father promised her to get to know Eddie.He shows him Sri-Lankan food.He didn't like Mr.Rupasinghe much because of his rude behaviour but still  he was ready for every test just for the sake of Menaka as she was about as different as anyone he had been attracted to before.She was confident and the best -looking south Asian girl.It took Mr.Rupasingheh seven weeks to think about allowing him anywhere near his extended family.He took to his cousin Gehan and his wife Thilini's party.Eddie was asked to wear a sarong and vest in order to dress traditional.Everyone else wore jeans and shirts,skirts and blouses.They laughed at him.There he met Gayan,Menaka's second cousin.
Then Mr.Rupasinghe takes Eddie to Anuradhapuram in order to show him part of their cultural triangle.The ruins of an ancient and advanced civilisation.To show how magnificient their history is.He keep blaming the white people for stoling their cinnamon and plundering all their resources.
Rupasinghe agree for Eddie's wedding with Menaka after lots of efforts.After marriage Menaka is busy outside in her work and she didnot even give time to her baby Kiki.Eddie and Mr.Rupasinghe becomes the best father and grandfather to kiki.Menaka tells Eddie that she is in love with some other guy who understand her better.Eddie was afraid of loosing Kiki's custody after divorce.But after Rupasinghe's death Menaka do not fight for Kiki's custody and visit  her once in a  week.Eddie marries Caroline who is very caring lady.

This review is a part of the biggest Book Review Program for Indian Bloggers. Participate now to get free books!