BOOK REVIEW: It's Not Right, But It's Ok (By Anuj Tiwari)

Today I am going to review the book ~ It's Not Right..but It's Okay by Anuj Tiwari. Author Anuj Tiwari sent me this autographed book and I really enjoyed reading it. 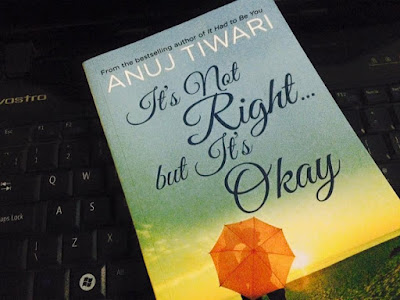 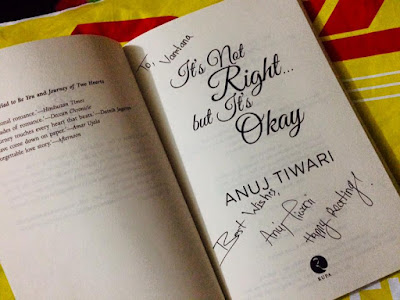 The story is about Arjun, Anjeera, Anushka and Ved. Arjun who is an author. Arjun and Anushka are best friends and understand each other so well. Arjun is an intelligent guy, a true friend and a good son. He is always there for his friends. Anjeera who is Anushka's sister goes through a breakup phase but want to pursue her dream of fashion designing in Mumbai. Due to  her current state of heartache her mother dont agree to send her to Mumbai. But then Anushka takes help from Arjun to convince her mother to allow Anjeera to complete her fashion studies in Mumbai. Arjun can do anything to keep his friends happy, he takes out time to solve other's problems and never say No to his best friends since college days. Then Anjeera meets Ved in Mumbai. Ved who loves playing football as wants to get selected in Kolkata Team works day and night to make his dream come true. Anjeera who was afraid of entering into any love relationship due to her past now falls in love with Ved. Ved and Anjeera spends time with each other and shares their secrets too. Ved reveals that he lived a tough life and his mom and sister are still living a unreputed life in brothel. He is afraid that after knowing this Anjeera and her family wont accept Ved and Anjeera's relationship. But Anjeera tells him that she will convince her family to get married to him. Then Anjeera, Arjun, Ved and Anushka plans to meet at Garba night. Anushka comes with her friend Iona and all of a sudden life of Ved and Anjeera takes a different turn. Unexpectedly Anjeera sees Ved and Iona so close together in a car, she completely breaks down after seeing her love with someone else. She meets Ved but she is not ready to hear any explanation after seeing them together. Next day he goes to play his match to kolkata and Anjeera receives a mail from Ved saying that he dont want to be with her in any relationship. Anjeera finds that he blocked her from all social media and for some days they are not on talking terms. This creates lot of confusion, misunderstandings between them. Anjeera feels that she did a mistake by again falling in love. She gets depressed and then Anjeera's friend Charu calls Arjun to talk to Anjeera. Arjun visit her and she feels good and then as usual Arjun tries to sort out the matter. He handle teh situation so well by clearing all the doubts between Anjeera and Ved. They come to know that Iona was the one created all the tension between them. Anjeera comes to know that even in college days she blamed Ved for attempting rape and because of that everybody in college stopped talking to Ved and his friend's group. But Arjun and Anushka were always with him and supported him as he was innocent. He loved Iona but she did not deserve his love.Then Ved and Anjeera clears every doubt when they meet and they live happily ever after.

What I liked in this story was Arjun's intelligence to deal with every problem in his friend's life. He proved emotional support to all his friends in need. I learnt how to be  a good friend and a good lover too :) What I did not like is that Arjun's friends group accepted Iona again in their life. They should have never forgiven her for all her wrong intentions. Arjun always says that your past is not your future and Anjeera learnt from him that if her past were not good, that doesnt mean that she cant have good future.

You guys must read this book :)

Thank You for stopping by!
xoxo
Vandana :)