The story 'The King Within' starts at a time towards the end of Samudragupta's reign and continues through Chandragupta Vikramaditya's reign till nearly the end.  'The King Within' by Nandini Sengupta is a historical fiction set in 373 AD, almost 16 centuries ago in the place in ancient India. The story opens up with Darshini, a courtesan actress who is travelling to Ujjayni to participate in a musical festival. She is attacked by a group of tribesmen and is protected by Deva and his group of friends. After the great sword fight, Deva introduces his friends to Darshini and this was the beginning of a beautiful friendship. The story follows their brave personal journeys with Deva turning into the glorious emperor Chandragupta, Kalidas writing his plays based on his time or Darshini 's journey from a beautiful maiden to the Nagar Nati to the member of the Court of Elders to a Buddhist pilgrim. You'll have to read the book in order to know the complete story.

I absolutely loved the apt depiction of the life of people in ancient era in this book.  l liked how the author made her characters in the book think and talk. It’s also worth pointing out that Author's writing is way beautiful and the use of right words are the ones which kept the story flowing and also fit the period, the setting and the characters she has chosen. If you're someone who like historical novels then I highly recommend this book!

"Sometimes, I wonder if it's all been worth it after all. You spend a lifetime putting in place relationships and then you turn your back for a moment and they all come undone. And there's nothing you can do about it. Nothing at all."

'The poisoned heart' by Nandini Sengupta is the second book in the Gupta Empire Trilogy but it can be read stand-alone too.

The story revolves around Skanda Gupta, the grandson of Chandragupta Vikramaditya. Skanda gets the throne even though he was not the eldest of his siblings and this creates lot of trouble in his life because his elder half brother Puru believes himself to be the rightful heir to the throne and through his cowardly ways tries his best to acquire the throne. Then there is entry of mysterious Rohini in Emperor's life and her ulterior motive seems to harm the Emperor. To know what happens next, you'll have to read the book!

A good writer draws reader into the story through a variety of techniques, especially plot, characterisation, dialogue and description and this book by Nandini Sengupta has all the elements of a book that keeps the reader gripped till the end of the story. I like the writing style of the author and I would recommend this book to every historical-fiction lover.

The Ocean's Own is a third book in the Gupta Empire Trilogy and a grand conclusion too. This book traces  the Kachha the prince's making of Samudragupta (grandfather of Chandragupta Vikramaditya). The two aryavrat wars and necessity to annex them directly in the realm of Gupta Empire is well explained through the plot of the book. Samudrgupta falls in love with Angai, a princess warrior of Kanchi, but will he allow his love to overrule his passion? To know more, you'll have to read the book. 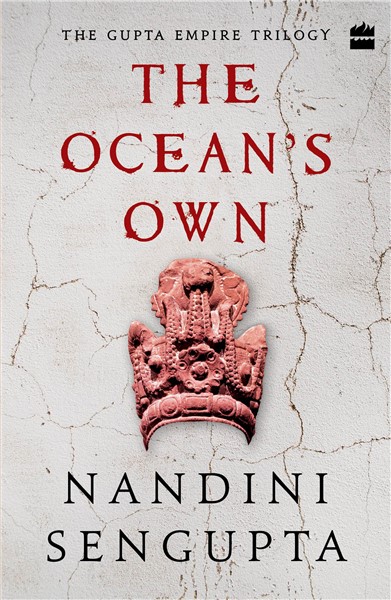 The author has brilliantly described battle scenes, very well expressed emotional turmoils and emphasised on great understanding love, marriage, and life philosophy. I would highly recommend all these three books in the Gupta Empire Trilogy to all the readers who love historical fiction!

Nandini Sengupta is a Pondicherry-based writer and journalist. After a chance trip to the Ajanta and Ellora caves in 2007, she began researching third and fourth-century India which quickly deepened into an obsession with India's glorious past. She now lives in Pondicherry's quaint French quarter with her little daughter, Kiki. Her first book of fiction, The King Within, was published by HarperCollins India in 2017.