GODS OF THE GODS (DIMENSIONS BOOK THREE) BY ABHISHEK

Gods of the Gods by Abhishek is a super fascinating book in the Dimensions series. Prior to this, he came up with Father of the Gods &amp; Land of the Gods. The earlier books set premises for the series. I would recommend reading all books in the series for a better reading pleasure. Though the author has mandated a list of characters and locales, yet familiarity with characters may take time if you read Gods of the Gods independently. The novel is not only futuristic but also provides glimpses of a post-dystopian society. Be it earth or some other planet, people are going to be fervent for resources for their survival. In a similar quest of gaining control over one another, two alternate worlds Asr-Gawa and Jargantaam are face to face. The latter is trying to subvert the former one. Why? Superiority…greed…aspirations to control others and much more? 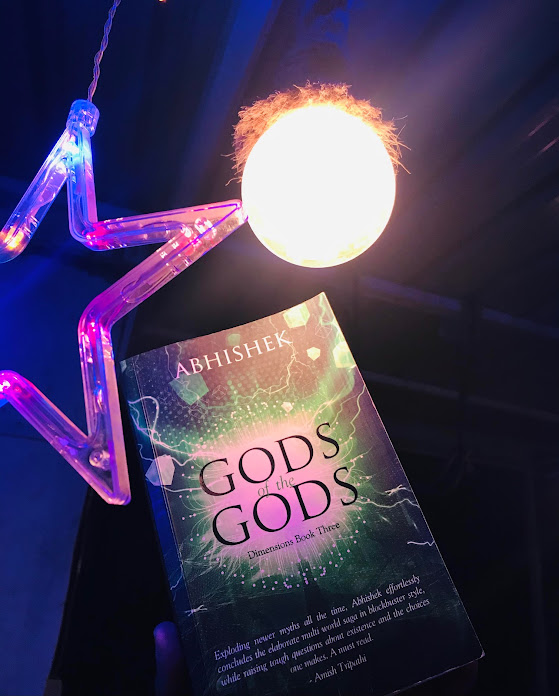 Evidently, it comes out midway that the council of Asr-Gawa failed in protecting the interest of its citizens. There is a commotion and rife about leaders inabilities. More or so due to Odin, he is disappeared. But little did people know that Odin was imprisoned by his son Baldr, who clandestinely sided with Jargantaam army. Like in any other world, alternate worlds (also known listed in some other dimension as earth is in one part) too have their share of conflict of interests and uprisings that led to outer invasion and civil war. Asr-Gawa wasn’t an exception.

The hero of the novel is Mathias and his friend Ram. They were orphans and in the previous novel was teleported to Asr-Gawa for physical conservation of mass. Their rise is phenomenal with Odin. When Odin is imprisoned and sent to Hel – a sort of energy production place – he had the company of Mathias and his friend Ram. The trio is taking every challenge to come out of hiding place so as to save their planet from falling into wrong hands of power. In this novel you will find chaos and dilemma about leadership taking precedence over action and drama. Many events are hushed and activities going clandestinely, more like a spy thriller.

Blending sci-fi and fantasy, Gods of the Gods reads like a riveting saga where even gods fight for good vs. evil. The young author Abhishek has delivered a power packed fantasy thriller relying on the realms of our universe, alternate worlds, Norse mythology, Quantum Physics, and much more.

All in all, the novel is a special treat for discerning readers of fantasy genre. With brilliant narration and measured pace, this novel is going to stay longer with the reading communities. Fingers crossed…something more on Ragnork or Thor may add to the OTT platforms like Netflix. The novel is that potential.