BOOK BLURB:
It is the summer of 2012. A young girl is molested in Guwahati in India’s Northeast, journalists take photographs and make videos of the incident, but no one tries to rescue her. The monsoons have arrived, and Assam is flooded, as it is every year.

In Siliguri, Kobita, a fifty four-year-old activist, married to Nayan, a blind poet, decides to travel to Guwahati to search for the molested girl who has gone missing. Before she takes off she leaves instructions to have a new bed made. Because of his disability, Nayan has no option but to depend on the carpenter and his family to trace his wife after her phone calls stop coming.
There is a riot in lower Assam from where Kobita last called her husband.

While Nayan grows desperate for news about his missing wife, their son, Kabir, is in England, absorbed in his research about Hill Cart Road, the highway that connects Siliguri to Darjeeling and the eastern Himalayas.

Missing is about seven days in the lives of these people. It is a study of the modern marriage, played out against the awareness of the question that gave birth to the Indian subcontinent’s first epic, the Ramayana: What happens when a wife goes missing? 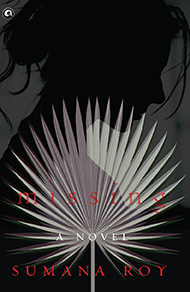 The story 'Missing' is set in Siliguri. The story revolves around Protagonists Nayan who is a poet but unfortunately blind and his wife Kobita who is activist. His wife Kobita leaves to Guwahati in order to help a molested girl to get justice. When after 7 days, Kobita doesn't come back home, Nayan and their son Kabir gets worried as they are unable to receive any information about Kobita. During that time in July 2012, the Assam is flooded in monsoons and this adds to the worry of Nayan and Kabir.

Most of the conversations in this story are between Nayan and Carpenter Bimal Dada, his helper Ahmed, his driver Shibu and Bimal da's grand daughter Tushi.
Nayan is unable to get any news about Kobita when she goes missing. Nayan gives a job of reading newspaper to Tushi. Tushi observes this old man and feels sad for him. Nayan's love for Kobita, his dependence on her and his anxiety when his beloved goes missing is very well expressed by the Author. Nayan hears expected phone calls from Kobita in his sleep. He becomes restless and all his thoughts are only about Kobita only.

In this story we also get to know how differently people think and what assumptions they make, when a woman who is a wife or a mother stays away from home for her work and how this society start making comments on her.
What I loved in this story the most is Kobita's bold character, how shes goes out of the way to help a molested girl risking her own life, her decision of marrying a blind man and showering all  her love on him and how she makes Nayan feel so dependant on her and who she loves her beautiful role in Nayan's life. Tushi's role is also very interesting in this book and you'll know it when you'll read the book.

The language used by the author is simple and easy to understand. The title of the book is apt, the book cover is attractive. The story is slow paced but I completely enjoyed reading this book.

If you want to read a different story then I would highly recommend this book to everyone and I am sure you all will love it.

Sumana Roy’s first book, How I Became a Tree, a work of non-fiction, was published in 2017. It was shortlisted for the Shakti Bhatt First Book Prize (Non-fiction) 2017 and the Tata Literature Live! First Book Award (Non-fiction) 2017. Missing is her first novel. She lives in Siliguri.