GUARDIANS OF THE BLUE LOTUS-2 : SITANSHU BY ANITA SHIRODKAR

As the divine Blue Lotus Indivara sprouts an ominous red petal, its guardians must do everything in their power to protect it and their kingdom. Aryavir and Sitanshu march to the border of Kalipura for a bloody showdown with the Chandraketu King Divyendu. It seems as if the Kamal Akshi Army with its peerless long-haired Kesakuta warriors cannot lose a war, but the wily enemies of Kamalkund have diabolical plans that are not written in any rule book. Thanks to the evil machinations of the Mayakari Queen Tamasi and wily King Kratu, Aryavir and Sitanshu are facing the battle of their lives.

With hidden ancient secrets that are known only to the revered Maheshwari Masters, the mythological Old World is about to be plunged into intrigue and danger its denizens could never have imagined. Powerful kings face mortality, relationships are tested to their breaking point and the Great War of Sompur will bring completely unexpected repercussions.

Written with the classic Indian ethos, Sitanshu, the second part of the Guardians of the Blue Lotus Trilogy, pays homage to India's magnificent mythological heritage and takes the reader on a journey into the heart of human passions. BOOK REVIEW:
After reading the book The Guardians of the Blue Lotus- Aryavir, the first book of a trilogy, I could not wait to read the second book Sitanshu, which is the second book of the trilogy. In the starting of the book, all the characters are very well explained to avoid confusion.


The story is set in ancient India and revolves around brave Sitanshu, who is Ashtradhari and also a great friend of Aryavir. Blue Lotus Indivara sprouted an ominous red petal and they consider it as omen of some kind. Little Eshwari  could feel the Lotus is in some kind of danger and then all its Guardians try their power to protect it and their kingdom. Sitanshu and Aryavir with Kar moves towards the border of Kalipura for a war with the Chandraketu Kind Divyendu. Sitanshu slowly realises that he is going to face the most critical battle of his life.

Aryavir was born with a curse over him and he really never had a chance to fight it. He has known for years that I was meant to die early. King Bhushan's wife Tamasi's who was Mayakari and her vile curse before he was born. His waiting game was giving him fear.

The story shifts between Sitanshu- Aryavir, Reva, Chitrangda, Demoness Tamasi. Reva daughter of Sudhamshu leaves her Chandraketu family forever and prepare herself to fight against her own people.Sitanshu is a story of power and human passions and also about the difficult and practical decisions which people need to take in war against their own people.

The characterization is strong. Narration is done very well. By the end of the novel, many secrets are revealed which will leave readers shocked. The series of events that follow are full of suspense. The story is well-written, gripping novel, unputdownable.  Author Anita has given the readers many memorable and strong female characters. The novel has much more to offer as it also highlights love and friendship. One of the finest work I have read so far this year.

The story is fast-paced which made reading this book even more interesting.I loved the writing style of the author. The language used is simple and easy to understand. The book cover is very attractive with the lotus flower. The title is apt too. Now I am eagerly waiting for the third book.

This is the first mythological fiction book I have enjoyed reading too much. I would highly recommend this book to everyone and I am sure you will love it. 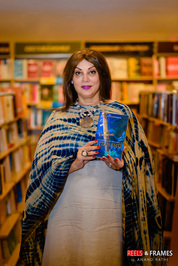 A student of Applied Art, Anita graduated from Sophia Polytechnic and spent 20 years in advertising and graphic design.
Anita's first work of fiction Secrets and Second Chances was published in July 2014, followed by Nights in Pink Satin in 2015 and an e-book, Adriana's Smile, in 2016.

The Guardians of the Blue Lotus- Aryavir, the first book of a trilogy, was published in 2017. Sitanshu is the second book of the trilogy.

the creation of beauty is art. said…
This book sounds super interesting! I am so glad you enjoyed it.
the-creationofbeauty.blogspot.com
16 June 2018 at 06:30

JESSICA JANE said…
Thank you for your support who has read our article. I'm very happy if you can share our article below

Arnold DK said…
nice books. it's a amazing write a idea and words. thanks for sharing these information with all of us. Kinemaster Lite
13 October 2021 at 01:03

andrewjackson said…
Our the purpose is to share the reviews about the latest Jackets,Coats and Vests also share the related Movies,Gaming, Casual,Faux Leather and Leather materials available Fun Ghoul Jacket
28 October 2021 at 08:12

mrbobystone said…
Hi , Thank you so much for writing such an informational blog. For more information Click on Naruto Anbu Jacket
30 November 2021 at 02:17

George Mark said…
Your site is good Actually, i have seen your post and That was very informative and very entertaining for me. Kaycee Dutton Jacket
16 February 2022 at 21:13

Jobi Johnson said…
This is the best post I have ever seen. Very clear and simple. Mid-portion Is quite interesting though. Keep doing this. I will visit your site again. John Dutton Jacket
9 March 2022 at 05:04