LIFE IN THE SUNSHINE BY T SATHISH

Sat, Sam, and Trib (a.k.a Triple sundae gang) are teenagers and they love cricket. They spend most of their time watching and playing the sport they love. They dream of making their living in the sport.
When they are not playing the game, they put on their thinking cap and come up with alternate versions of important matches or provide parodic answers to questions that have plagued cricket fans over the years.
However, fate intervenes in their idyllic life. On 18th April 1986, Javed Miandad hits Chetan Sharma for a six in Sharjah and leaves their cricket viewing life in tatters. The after-effects of this fateful event, continue to haunt them for many years.
Their problems don’t end there.
Sat fails to graduate from school level cricket to state-level cricket. He is heartbroken by the loss of his dreams and faces a mini identity crisis.
How do the boys solve their problems?
Will the boys ever recover from that Javed Miandad incident?
Will Sat get his mojo back?
Come, join the heartwarming ride and find out the answers, as Sat takes you through his nostalgic memories of the sport and narrates his coming of age story, which is deeply influenced by the sport! 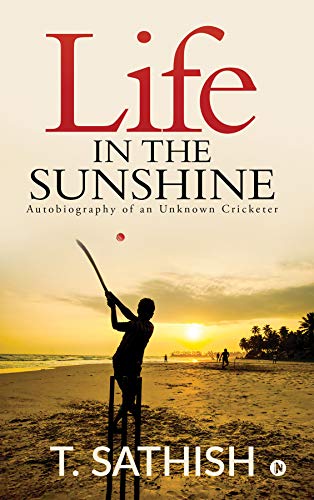 BOOK REVIEW:
Trib, Sam and Sat, the famous Triple Sundae gang are kids residing in the same neighborhood who become friends because of their common love for cricket. Their story starts from more modest days when the kids gang up and buy their first cricket kit by using funds from the elders of their colony. As they start taking cricket more seriously and attend cricket training camps, Sam turns out to be the star among the three with Sat aspiring but not able to catch up to the expectations of the coaches and selectors. Trib finds inspiration in background work of match commentary and is comfortable settling as a fulltime commentator. That however is not the case with Sat who is torn between his love for the game and struggle to become a cricket whom the selectors and the world find worthy. How are these friends going to end up in life and what happens to their cricket dreams? What is the journey of these friends, who like millions of other youngsters in this country literally worship cricket as a religion and cricketers as Gods, forms the rest of the story.
The story traces the journey of the three friends from their teens to their college days, from their innocent days of dreaming about becoming star cricketers by watching the sport on TV to finding their foot in this world. The simpler times of the mid 80s and 90s are captured beautifully by the author simultaneously showcasing the evolution of times and cricket from black and white tv sets to the color ones, change in white uniforms to color coded dresses for each country, introduction of commentators who are not ex-cricketers, and the list goes on. The story also digs in detail into the major matches played by the Indian team against other countries during that period.
Innocence of early teenage, rush of hormones in college and budding romances to getting serious and realistic about life, the author has covered all stages with cricket playing backdrop. With the world cup happening again this year, this is the best time to pick up this book to be taken on a nostalgia ride as the author debuts with a bang, mixing cricket, entertainment, and emotions in the right mix.