SNAKES IN THE MEADOWS BY AYAZ KOHLI

BOOK BLURB:
Jammu and Kashmir, 1987. In the hilly village of pathri Aali, where legends appear true, Aslam and ashwar, two young lovers, dream of marriage and of good things of life. But that is not to be. Unable to cope, Aslam leaves pathri Aali forever. Years later, as men migrate to Saudi Arabia for employment, pathri Aali is populated mostly by women and children. Soon they realize the mujahedeen, who guise themselves as their liberators, are the worst perpetrators, and misery seems inescapable. Ashwar refuses to be cowed down by this reign of terror and is determined not to let it devastate the once-peaceful village. The only one she can Bank on is aslam—and she calls out to him across the distance of time and space, to return and live up to the legends of their village. Snakes in the meadows is a saga of the onset of militancy, and the suffering and the resilience of pir panjal—the ‘and’ of Jammu and Kashmir. 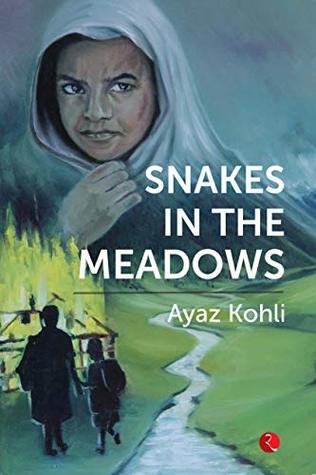 Snakes in the meadows is the heartbreaking story of the struggles of the people of hilly village of Pathri Aali in Jammu and Kashmir, 1987. This is Author Ayaz Kohli's debut novel and I would say he has written a brilliant story of courage and love. The story opens up with the innocent love between  Aslam and Ashwar who fell in love at the age of sixteen. The heartless community and its invalid rules separate Ashwar from Aslam and Ashwar is forced to marry Hanif against her wishes. Hanif was the  widowed father of two children. Ashwar accepts him with his two kids Shamma and Manzoor. Ashwar's dream of attaining education and marrying Aslam were shattered. Ashwar had remained quiet throughout the whole ordeal, resigned to her fate and accepts her new reality and forgets about her dream. Aslam held himself responsible for all this as he remained a silent observer who could do little but watch his dreams and those of the girl he loved shatter. and tries his best to convince Ashwar to pursue her studies only to find that she has accepted the harsh reality of her life. Aslam's life takes a turn when his father Haji Mir forces his wish upon him to marry Zaitoon. Aslam only loved Ashwar and he could not think of marrying any other girl. He boarded a train to Mumbai or I would say circumstances compelled him to leave his homeland. His father disowns him. Due to poor conditions, the men of Pathri Aali migrate for Saudi Arabia for employment leaving behind women and children. Soon they realize the Mujahideen, terrorizes people and the peace of this village is disturbed. Ashwar refuses to be cowed down by the reign of terror and is determined not to let it devastae the once-peaceful village. She calls out to Aslam across the distance of time and space, to return and live up to the legends of their village. To know how and whether they will be able to fight Mujahideen or not, you'll have to read the book.

The cover and title of the book are apt. I loved the writing style of the author. The story is emotionally arresting, thrilling and gripping.

I would highly recommend this book to everyone as this is one of the emotionally moving story I have read.

ABOUT THE AUTHOR:
Ayaz Kohli is presently serving as Joint Commissioner-GST, Mumbai. Having seen the rise and repercussions of militancy from very close quarters, and moved by the plight of the people of the border districts of Jammu and Kashmir, he has come up with his debut novel, Snakes in the Meadows.
Labels: BOOK REVIEW Snakes in the meadows