THEY GO TO SLEEP BY SAUGATA CHAKRABORTY

BOOK BLURB:
A young widow of a drug overdose victim disappears from Goa. Three years later, a British National claims to know her whereabouts minutes before departing for London Heathrow. The Police of two states is pressed into a joint manhunt. 'They Go to Sleep' is a racy thriller on police procedure and criminal psychology.

In the year 2043, when nobody sends a letter anymore, an unlikely candidate decides to write about his springtime memories that are soon going to be erased. When his identity gets revealed, the impact on several individuals and the society at large assumes epic proportions. 'A Man of Letters' is a science fiction with humane emotions at its core.

A promising poet meets his muse on board a train. They share a captivating conversation but forget to ask each other's name. Will they be able to meet again in an Indian metro? 'What's In a Name?' is a humorous look at everything Bengali: gossip, fish, cutlets and the Kolkata Book Fair.

These three stories are joined by nine equally exhilarating tales of ordinary people and the choices that they make under extraordinary circumstances. The compilation will surely compel the readers to keep their midnight lamps burning. 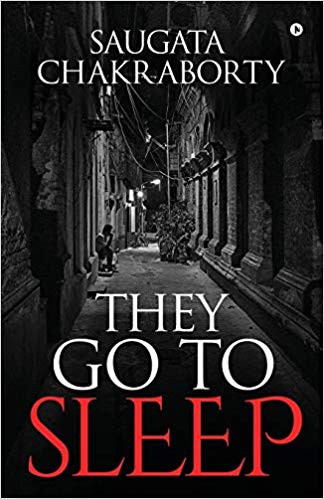 They Go To Sleep is a collection of twelve short stories which are unrelated, each with a different genre and backdrop. They go to sleep is the name of the book as well as the first story, which is kind of a starter on how the stories ahead are going to be. While all of them are fictitious, some of them draw heavy inspiration from real life stories, with the author presenting his own take of the real incidents. The genres vary from thriller to futuristic science to suspense and romance. However, all the stories have a dark theme and a certain mystery which will keep the reader guessing on how each story is going to end.
The narration style as well as the characters in each of these stories are very engaging, irrespective of the theme and genre, which portray the brilliance of the author. As with most short stories, the author tries to shock the reader with unexpected endings. Also, most stories go back and forth in time giving the audience the required intrigue into the respective story’s timeline. These features stories hence cater to varying audience taste due to the wide variety of genres they are based on.
Most stories also show potential to be a complete novel on their own and the author should have explored them further instead of abruptly bringing them to an end. The book is definitely not a light read as the stories are meant to entertain the intelligent audience who look for stories with strong concepts. Some of them also come with a string message that makes the reader brood about even
after they have long ended. Special mention to the book cover which amps up the suspense quotient. As with any short story collection, the author needs to be extra careful in holding the audience’s attention in those few pages and Saugata has completely succeeded in that aspect. A must read for lovers of short stories and those who long for books that will make them think, this book is an excellent pick for a lazy monsoon afternoon.

RATING: I would like to give it 5/5 stars and would highly recommend it to everyone!