BOOK BLURB:
A publication on the Arya Dharma (Noble Dharma) - A better way by a unique combination of our heritage, spirituality and current affairs by going back to the future. Bharata(India) has the greatest history, heritage and culture ever possessed by any civilization in the history of the Universe.

It is a real shame of what we have become today because we blindly try to ape and emulate the fraud FUKUS (France, UK, USA) systems of "casino capitalism" and "paid democracy" which are totally unsuitable not only to us, but to any country on this planet, and especially harmful to Nature, the supreme embodiment of Brahman (God). It really makes you wonder about the state of this world, when the priceless Amazon rain forest is valued at $20 million, and the Amazon online shopping website is valued at almost a trillion dollars.

It really makes you wonder about the state of this world, when the top 1% possesses more than 47% percent of the global wealth, while the bottom half still worries about scrounging for their next meal. If Bharat and this world must have any hope of restoring its past glory, it must abandon the fraud FUKUS systems which place only money and self-interest as their guiding principle, over Dharma and SEVA (Selfless Sacrifice), which were our eternal guiding principles that were laid down ever since Ram Rajya.

Dharma and SEVA were the guiding principles of the Golden Era of Bharat, when we surpassed even the Roman, Greek and Persian empires and even made a world conqueror like Alexander retreat in fearful haste without even daring to fight us. 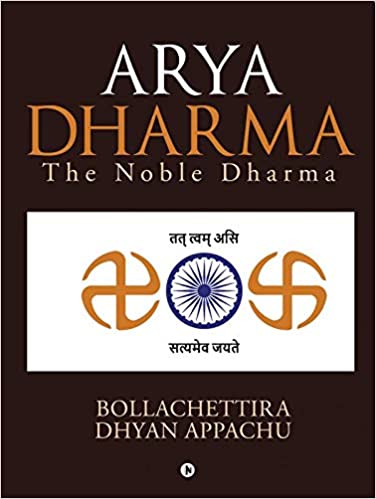 Arya Dharma: The Noble Dharma is a commentary on how the West – France, UK and US have changed the world dynamics and behavior of humans by making money the center of life. Contrast this with India from centuries ago which was rich in its heritage, values and driven by Dharma and Seva. After all the western influences over these centuries, India has also transformed majorly as citizens are also attracted to the other cultures and are imbibing them as the money from those cultures remains attractive. The author narrates the times of Rama Rajya as well as Kautilya’s intelligence and political acumen which were believed to be the backbone of the wonderful governance in those days. The author hence puts forward his wish for a new way of living – a sort of religion – the Arya Dharma, drawing its foundation from ancient Indian wisdom. The author supports this with his observations, statistics, examples and reference material.
The author obviously has done extensive research and years of reading to have written a book with such depth which reflects all through. The first thing that any reader would notice is the length of the book as it is close to 600 pages; and it is totally worth the readers’ time as the book is such a treasure trove of information. The book also makes for such an important read because it touches on various aspects of governance, finance, spirituality, and everyday life. The writing style is lucid and easy to understand.
If the readers attempt to understand the concepts explained by the author without being judgmental then this book provides ample food for thought. The author provides a wholesome insight into the current world we live in as well as the past which is long forgotten. While the author’s outlook for future of single region and single belief system might sound farfetched, the knowledge imparted by this book is very useful to young minds to introspect. Highly recommended!

ABOUT THE AUTHOR:
Bollachettira Dhyan Appachu's passions include his family, his pets, farming, yoga, meditation, nature and writing on issues close to his heart on his blog www.aryadharma.world
He possesses an ME in civil engineering from the University of Florida, with 22 years of rich experience in the Global Engineering Consulting Industry.He has topped the Entrepreneurship Essentials NPTEL course 2019 (top 2%) by IIT kharagpur. He is a member of American Mensa since 2000. He is the founder of Shambhala Samathvam, a start-up focussed on niche innovative solutions for Real Estate, Agriculture and Nature Living. He was recognized with the Best Employee Award in 2003 for technical achievement in the information solutions division of SNS Lavalin- Atkins North America, now the world's third largest design firm.

siva said…
Get daily updated deals and offer and save big on your purchase
Tracedeals's live search is helping to find the best deals compared to other online stores.