MURDER IN PAHARGANJ BY KULPREET YADAV


BOOK BLURB:
On a cold December morning, a white woman is found murdered in a cheap hotel in Paharganj, New Delhi. Vicks Menon, an out-of-work journalist, is tipped off by the hotel's receptionist and is the first to arrive at the crime scene, where he discovers a lead. It's the bus ticket used by the dead woman two days earlier. But Vicks is battling personal trouble. He has no money, an alcohol problem, and a nearly broken relationship with Tonya, his estranged live-in partner, a clinical psychologist who specializes in profiling hardened criminals. Moving in and out of the shadows, Vicks pushes his investigation harder as it takes him from Udaipur to Bangkok. On his side, for resources, he has a nameless intelligence operative, and to read minds, a lover who is beginning to trust him again. But above all, his instinct to stay inches ahead of death will be the key to his survival. If Vicks lives, this is one story that will change his life forever. 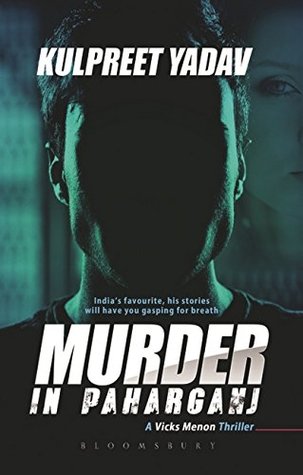 REVIEW: On a cold December morning, a white woman Sherry Bing is found murdered in a hotel in Paharganj, New Delhi. Vicks Menon is the first person to arrive at the crime scene. There he finds a bus ticket from Udaipur to Delhi, which gives him a clue about the place from where this dead woman was travelling. Vicks Menon finds out that the killer of Sherry Bing is her lover but the motive for killing her was still a mystery for him. Vicks Menon with the help of Tonya, tries his best to find out the identity of the killer. He travels to Udaipur to get any clue and do everything in his capacity to solve this mystery.

The story is very well written. It has everything including suspense and many incidents to thrill the readers. I would say the Author perfected it as it was such a page-turner. The book cover and title are apt. I found Author Kulpreet Yadav's work so brilliant in this book and I am eagerly looking forward to read more of his books.

I would give 5/5 stars and would highly recommend this murder mystery to all readers.

One of the leading fiction writers in India, Kulpreet Yadav retired voluntarily from the armed forces to pursue a career in writing in 2014. Also a motivational speaker now, he has spoken at more than two hundred schools, colleges, and global corporate brands during the last four years. Popular for his Andy Karan series, his new spy novel, Murder in Paharganj, was published by Bloomsbury India in Oct 2017. Kulpreet lives in Delhi with his wife and two daughters.