THE TIMES WE LIVE IN BY MADHAV THAPAR

Religion does not breed terrorism, hatred does.
From Madhav Thapar the author of the much loved A Friend Like Karna comes his second novel The Times We Live In.  This is a world of terror and treachery, but also patriotism and hope. Spanning the seven decades and more since India and Pakistan gained Independence; it cleverly juxtaposes references to true events with a tale of different generations of two families separated by the bloodiest partition ever.
At the centre of the narrative is the hunt for the dreaded terrorist, code named Cobra. As the faceless enemy spreads his tentacles of terror, the Indian RAW is in relentless pursuit, and the body count rises. The action shifts rapidly from scene to scene across three continents and multiple timelines.
Yet, this is not a thriller alone. In his trademark style, the author brings forward various aspects of human drama: love, sacrifice and family values, even as he unravels the motivation and machinations of a criminal mind.
Suspense till the very end, and twists and turns throughout. 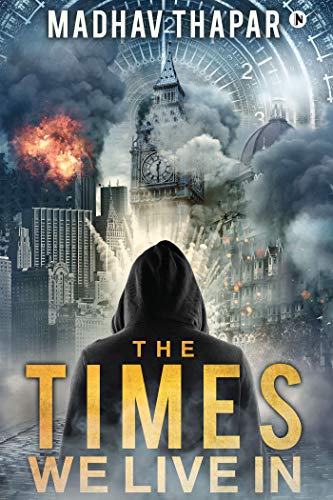 BOOK REVIEW:
The times we live in by Madhav Thapar is a fiction story of behind the scenes of 9/11 attack, 26/11 attack and ISI Gang. The story states that behind the 26/11 attack there were 4 main culprits out of which the three were already under investigation. The fourth which was suspected was called Cobra whose original identity was yet to be revealed. The RAW team however guesses two people Aman Khan and Imtiaz khan.  The story takes us back into the partition era where Parvez Khan and Sushma Mehta who part their ways due to the partition. Sushma Mehta loses her family in the hands of Pakistanis and is left with her younger brother Jaiprakash. She soon  finds a job to take care of a wealthy businessman's daughter Naina. Jaiprakash goes to the military school and after working in army for years gets lost and is declared dead while Sushma handles the business of Naina's father.
On a business visit Sushma finds her long lost love Parvez and they secretly get married. Sushma loses her connection with Naina and has a baby boy Aman khan who grows us to be a well known businessman. Jaiprakash being lost is brain washed and being turned into terrorist with the name shaukant. After his family's request and his wife's telling, Shaukant leaves the ISI gang and enters into politics and turns into the Prime Minister of Pakistan. Imtiaz, the son of Shaukant undergoes a trauma for a year after the 9/11 attack. With both the suspects coming to India, Aman Khan and Imtiaz khan and the Indian Prime Minister meeting the Pakistani Prime Minister and the most important event coming up, Cobra's target was to eliminate Jay and Nishi kapoor because Cobra loved destruction.  The center of the story is to find Cobra who lurks out in the dark planning for mass destructions and chaos. The plot of the book is good.  Reader can visualize the story and can relate themselves to the horrific world of terrorism. I liked the writing style of the author. The title is apt.

I would highly recommend this book to everyone.

Unknown said…
Hi Vandana
I would like to connect with you( for my book reviewed by you)
Please share your email id / contact no.
Regards
Spandana
11 February 2019 at 16:01