Parchhayee: Ghost Stories by Ruskin Bond Overview - What worked in the episodes till now?

Parchhayee: Ghost Stories by Ruskin Bond Overview - What worked in the episodes till now?

Premiered in January 2019 on ZEE5, Parchhayee: Ghost Stories by Ruskin Bond was unlike any horror series made in India. An adaptation of supernatural-themed short stories written by Anglo-Indian writer Ruskin Bond, the ZEE5 Original Series series does not aim to scare its audiences. It rather uses its paranormal setting to address highly emotional themes like heartbreak, loyalty, longing and many more. But at the same time, the series gives its episodes an incredibly nostalgic vibe, similar to Ruskin Bond’s writing style. An anthology series, Parchhayee: Ghost Stories by Ruskin Bond also boasts of a well-known and talented star cast along with eminent directors like Aniruddha Roy Choudhary of Pink fame and popular south Indian director V.K Prakash taking on the directorial reins in the series.

With 8 episodes released till now, we felt it was a good time to revisit the highlights of the previously released episodes. Thereby, piquing your interest in this well-made web series.

Episode 1: The Ghost in the Garden

The episode revolves around a bunch of kids who notice a young lady wandering in the woods, only to lose track of her eventually. This routine continues to take place while rumours begin to reach their eyes. Who was this lady? Were the kids heading into something dangerous? Suspenseful and heart-breaking in equal measures, the child artists and Sarah Jane Dias give quite an impactful performance in this episode.

Episode 2: The Wind on Haunted Hill

After getting caught in a downpour, 12-year-old Usha (Sara Arjun) is covered to run for cover in the ruins, on her way back from the bazaar. Unknown to her, Usha’s younger siblings too are in the ruins. However, as the lightning flashes across the sky, in its light, the kids are able to see the ruin’s ghostly residents. Who were these spirits? What will the kids do on spotting them? These questions form the central conflict of the episode. Yet another episode where the child artist shines, the episode is all about Sara Arjun and her on-screen siblings. But at the same time, one must commend the restrained performances given by Manav Vij and Dilip Tahil. 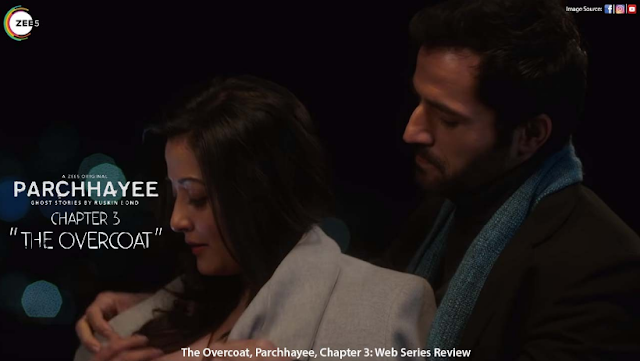 Released on Valentine’s Day, the episode follows Nick is back from the UK on a visit to his hometown. On a frosty night, he heads out to attend a party, meeting old friends. At the party, he meets Julie, a beautiful girl. They strike up a wonderful conversation and walk back home. On the way, Nick gives his overcoat to her, asking her to return the coat in the morning. But fate had some other plans for Nick. Does he meet Julie again? Will he come to know the truth about her? The answer to these questions leads to a heartbreaking conclusion. Sajjad Delafrooz as Nick and Raima Sen as Julie make for a charming pair on screen. The crackling chemistry between them is a treat for the eyes and goes on to haunt you once you come across the twist in the end.

A heartbreaking love story shrouded in mystery, the episodes spans across a century exploring the truth behind a lovelorn spirit who keeps jumping from a bridge in her grief. What is her tragic story? How does our protagonist uncover this mystery? This episode is perhaps one of the most poignant stories in the series. Chandan Roy Sanyal and Priyanka Bose shine in their roles, playing to the strengths. But it is the haunting performance of Divina Singh as Gulabi that will break your heart.

A loyal caretaker of a castle awaits the return of his master, who has been missing for three decades. Will the master Robert Astley ever return and prove the skeptics wrong or is there is a darker secret lurking in the shadows of the castle. Brimming with a vintage colonial vibe, the episode sees Shakti Kapoor in a never-before-seen avatar. For that reason itself, the episode deserves a watch.

A brutal massacre takes place in the Ritz Hotel decades ago, but the memories of its are still alive in the wall of the hotel. So, what happens when Rahul, a writer, checks into the hotel. Will the past make a return to haunt his present? To know that, check out this thrilling episode. While Amol Parashar gives a great performance, it is Puneet Issar’s chilling avatar that will give you goosebumps throughout this episode.

Jayant, along with his guide Sridhar, is on a forest survey. However, both of them come across something more than people and animals out there. When people start warning them against venturing deep into the forest, that’s when the mystery and tension pick up a whole new high. Internet’s heartthrob Sumeet Vyas moves away from urban romances to give an ace performance in this intensely thrilling episode.

Ganpat is a crime scene photographer but life, in general, does not look promising to him. That was the case until he came across a mysterious diamond that leads him to Lavani, a lustful ghost. With the promise of untold riches, if he fulfils her request, it is exciting to see how Ganpat is tempted to be consumed by greed and lust. With a strong moral at its heart and complex characters, this Kunaal Roy Kapur starrer episode is for those looking for a philosophical punch in a thriller.

So, that was a quick flashback to the previous episodes of Parchhayee: Ghost Stories by Ruskin Bond. Different from the rest in the web series space, we are keeping our eyes open for this paranormal series. Are you?

smm planners said…
Absolutely great posting. I actually happy when i done this topic. I am excited world have a excellent author. Always i am waiting for next reading. Thanks a lot for great posting share. Social Media Marketing Solution
7 May 2019 at 00:09

Anonymous said…
Fantastic website https://www.instagram.com/love_spellcaster_samael/
I can recommend and greetings.
11 June 2021 at 09:42