An Extraneous Psyche in Serial Killers from Bengal Cinema


I am fascinated to scrutinize the extraordinary psyche and chemistry in the brain of a serial killer. The numbed innocence paradox with the brutality of action attracts me most, especially in Bengali Movies. Yes, I repeat. I find Bengali serial killer movies to have a superfluous bang. Back to back Tollywood has given us two such movies which gave serious goosebumps in the past. Further exploring the theme is ZEE5’s recently released web series Water Bottle. Here goes a short narration through my analysis of the series. Hope you like it.
Water Bottle
The camera repeatedly focuses on a blue Water Bottle hung around the neck of different school going boys with a bag on the back. The narration repeatedly indicates the word FEAR. These boys are being kidnapped by a vicious serial killer, only to be beheaded or hanged or drowned. He justifies his actions as freeing those innocents from FEAR which he himself faced in his childhood.
Rajatava Dutta aka Jyotileshwar is a perfect choice for Water Bottle, bringing a balance of viciousness, absurdity and composed expressions to his role. Dialogues, acting and the presentation of the film is awesome. This is a must watch web series for those who are inclined towards serial killer characters in fiction.
On that note, let us explore some movies on serial killers that preceded the series.
Vinci Da
Directed by Srijit Mukherjee, The feral acuity of this interactive drama is superfluously played by Ritwick Chakrabarty. It features a novel and thought-provoking premise - the creativity of a make-up artist is challenged by the society visceral force to use his articulate brain in rendering the storm of destruction. Like Water Bottle, this series is a great example of a combination of great actors and technicians coming together to tell a story with utmost effectiveness.
Baise Srabon
In every serial killer movie, the cops and the killer are the focus of attention. The cops of such killer series are always categorically been chosen as old wine who has once rocked as the hero. In this movie too, Bumba da aka Prasenjit Chatterjee was cast in the role of an ex-Police officer who begins investigating a serial killer case. In Water Bottle, Chiranjit Chakrabarty’s role does seem to be inspired by the character played by Bumba Da. 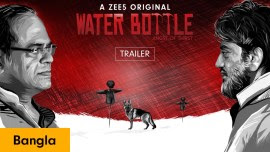 Feluda & Bomkesh Bakshi
Needless to say the thrill and excitement of this special thriller and detective series. We are grown up on numerous detective series featuring these two legends, with some of their popular ones revolving around serial killers. Nothing is comparable to these legendary series. The action, plot and narratives are like a magnum opus. With thrills and suspenseful storylines, it is no surprise that they continue to be adapted on the big screen.
To know more about serial killer movies and analysis of the same, stay connected to this space!