BOOK BLURB:
A young woman is found on the streets of Mumbai, dazed and covered in wounds. Her mind is clearly addled by drugs. She tells a TV journalist that she is the famous singer Asavri Bhattacharya, the winner of the 2016 reality TV show Indian Koel. But as far as the world knows, Asavri died in a car accident soon after her win. Her body was cremated; her death mourned by the whole nation. As news spreads like wildfire, the press and public begin clamouring for answers. How can Asavri be alive? And if this is indeed the real Asavri, then who was cremated three years ago? And who is behind what happened to her? Is it Tanya, the first runner-up who wore the victor's crown after Asavri was declared dead, or Rudra, Asavri's ex-husband? Or is it Kamini Devi - the glamorous MP with a sinister plan? Or Avniel, the film journalist who shot to fame by writing Asavri's biography soon after her death? And why does Asavri keep muttering the name Monty? Who is he? Nobody's Child Is An Exhilarating And Chilling Story About The Dark Side Of Fame. 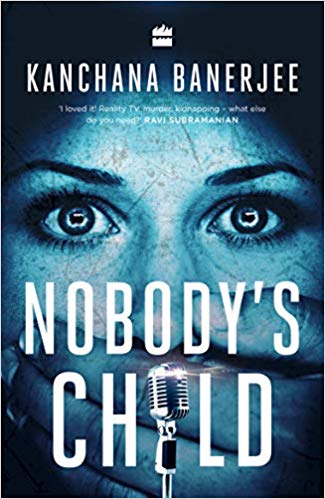 BOOK REVIEW:
Avniel the once infamous journalist at a media house and now a bestselling author gets the shock of his life when he sees on TV the news of Asavri lying on the footpath in unrecognizable condition. The same Asavri who was once his best friend, an underdog disowned by her family but rose to fame by winning the singing reality show Indian Koel, who was presumed dead two years back in an accident, and based on whose life he wrote a book and sold millions of copies. Other than her voice, the Asavri in front of him is only a shadow of her past self - abused and drugged for a prolonged duration, she remotely resembled the person the world knew as the singing sensation.
Kamini Pratap Singh was equally disturbed by the return of Asavri, since her daughter Tanya, also a contestant of the reality show and the runner up, got all the contracts and singing opportunities due to Asavri’s sudden death. As the initial suspicions turn towards Avniel and Tanya who obviously benefitted the maximum from Asavri’s disappearance, as the story unfolds there are more secrets waiting to revealed, of all the drama around Asavri’s rise to fame and her past,and that of Avniel and Kamini.
The story starts with a bang - once famous and now dead person surfacing suddenly alerting all those who were involved in her past. The story traces Asavri’s journey from being a timid ambitious singer who lands in Mumbai to braving a lot of ups and downs before winning the title, surrounded by cunning individuals trying to manipulate her success and fame for their own greed. The story showcases the ugly side of success, media that is always hungry for controversy and the lengths people can go to hide their past.
The story retains suspense with few clues thrown occasionally to keep the reader guessing about the real culprit behind Asavri’s pitiable situation. The author succeeds in weaving a very taut and gripping story that keeps alternating between the current timeline and that two years back while Asavri was participating in the contest. However, there are couple of graphic scenarios described vividly in the book which may not be enjoyed by all sections of readers. This is a must read for all suspense and thriller fans and for anyone looking to read an entertaining story if some portions of the violence can be ignored.


ABOUT THE AUTHOR:
Kanchana Banerjee lives in Gurgaon with her husband Sandeep and her three boys Rohan, Archie & Casper. In another life she used to write for various publications and companies, now she is a full time author. When not writing, she enjoys gardening and playing with her dogs. Nobody's Child is her second book.

floyd said…
Thank you for sharing, and nice articles you have here buy weed online moreover the admin of this site has really worked hard for all this once more thanks for sharing your articles.
20 November 2019 at 09:56