This story is about an internationally renowned Indian Computer Scientist named Professor Satish Ramanna who has created an INVENTION for the betterment of his country and society. This INVENTION is secretly guarded by Professor Ramanna and no one knows the details of the same. The entire society and the government are highly excited about this secret INVENTION, as Professor Ramanna had enjoyed an excellent previous International scientific record in the past. The Media has also been following up closely on the progress of this INVENTION and every now and then there are articles written about it in the newspapers, though no one knows the details of this INVENTION.

But there is this group of Bad Guys with their main leader Mr Madan Kalra and his associates namely Mr Xavier Dias, Mr Ali Asghar, Mr Raj Shekhar and Mr Ranjit Shetty who are out to get this INVENTION for their own personal profit at any cost! They try to cajole Professor Ramanna to sell that INVENTION to them, but the Scientist refuses them outright since he is very patriotic and wants his country to benefit by this INVENTION!

This incident gets major news coverage since Professor Ramanna was already a cynosure of the entire country’s eyes! This Case is entrusted to the ace cop Assistant Commissioner of Police Anand Rane to investigate further. On his personal front, Anand is a widower and he has a beautiful 16-year old daughter by the name of Anjali. Over the years because of Anand’s busy schedule, he can’t give time to his only daughter and hence there is a growing distance between them. As a result, Anjali always feels lonely and sad and she always wishes that she could have a best friend and a soul mate who will always be there for her.

In the meanwhile from the confines of the partly destroyed Lab, a SENTINEL emerges indicating that someone has managed to survive the carnage and the blast! “THE SENTINEL” as if on a pre-set mission starts knocking off Madan Kalra’s gang one by one. As these elite mafioso are also well connected socialites, this case gets a lot of coverage and is also entrusted to ACP Anand. As Anand goes about investigating these Cases, he slowly realizes that the “Bad Guys Murder” case is linked to the “Scientist Ramanna” case.

Will ACP Anand Rane solve this mysterious Case? Who is this SENTINEL and why he is taking revenge on behalf of the Scientist? Was the INVENTION destroyed in the Lab explosion or does the SENTINEL possess the Scientist's Secret INVENTION? Will Anjali find her true best friend? The answers to all this and more will find you engrossed in this terrific Page Turner called ARIHANT - REVENGE PAR EXCELLENCE. 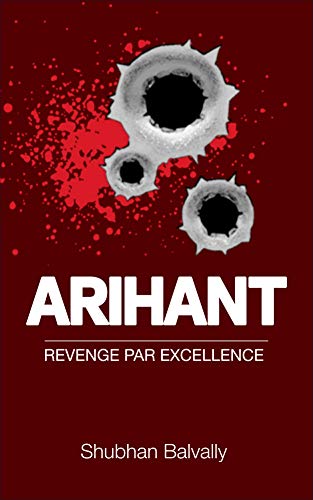 'Arihant' happened to be one of those novels that grips from the start! I must say it is an astonishing debut, especially well-written for a debut novel. The book opens up with a Award Ceremony function where great thinker and scientist Professor Satish Ramanna, was rewarded by Indian Chamber Of Scientists for his great contribution to the country, in the form of his latest invention. In this event, he reveals about his mysterious invention, which according to him, can put India ahead in the world map. The event was also attended by five other VIPs Madan Kalra, Xavier Dias, Ali Asghar, Raj Shekhar and Ranjit Shetty, who gets really interested and curious about Professor Ramanna's latest invention.

Right after the award ceremony event, Professor Ramanna's car faced continuous ambush and  continuous chasing by few bad people but he finally manages to reach his lab, GENEXT premises and within few minutes there is a blast in the lab. The professor is found to be dead. What took away Professor Ramanna's life and what happens to his mysterious invention remains a mystery. Whether the invention is stolen or is destroyed in the blast,  ACP Anand Rane and his team had been entrusted with this task to find about the invention and also to solve the mystery of Professor Ramanna's death.

After some days of Professor's death, there are macabre series of murder and 3 bodies were found. The only clues that investigators could gather from the murder spot was that there was a certain common pattern of murder followed in all murders, the jaw lines and rib cages were smashed and their arms and limbs have been twisted beyond our imagination. The situation of these mysterious murder cases become even more perplexed with the sensational slaughter of Mr. Xavier Dias. In this case also, ACP Anand observed a strange and striking similarity. With these series of murder, they atleast gather an idea that the same person was committing these murders, but he found no connection between the 2 sets of victims except for the style of murder committed. In the course of investigation, they unearth something solid and what they witness was unlike anything they have ever encountered. And that is a suspense for you all to read and know, I wont reveal anything more about it.

WHAT I LOVED ABOUT THIS BOOK

I absolutely liked ACP Anand Rane's systematic approach to fair investigation at different stages of investigation, including what to hide from media, how much facts to reveal to media, how to interrogate the murder suspects, how to work calmly even under so much media pressure, just everything about his behaviour was commendable! I particularly enjoyed the sweet friendship shared by Anjali and Arihant.

The well-defined plot, the good writing, brilliant storytelling and the fast pacing is what makes 'Arihant' an absorbing, thrilling ride. Author Shubhan's writing is descriptive and action-oriented. Every event in the story is very well-written and when I say its well-written, I mean that it's easy to get lost in the words. In general terms, this was a very good example of what good science fiction is termed to be, twisty, surprising and a real page turner!

RATING- 5/5 Stars. I would highly recommend this novel to all Sci-Fi lovers.