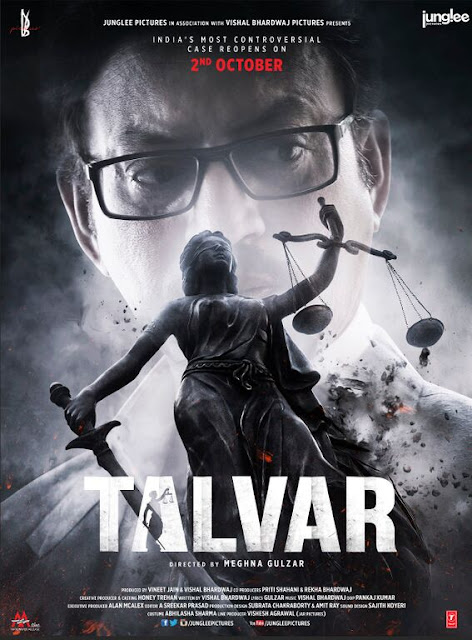 Review-Meghana Gulzar brings very disturbing and well-executed movie based on real life events to the big screen.Her film is a smart film that does not take actual positions, but instead to choose to comment on the larger state of affairs in India. Meghna Gulzar and Writer- Vishal Bhardwaj has done a great job in dramatizing the Aarushi Murder Case without veering into sensationalism and heavy-handedness. The names are changed from from Nupur Dinesh Talwar to Nutan and Rajesh Tandon. Ofiicer Ashwin Kumar tries to solve this case and his cool and cynical wit breaks the tension during the dark moments of the film. The prime suspects were parents and the domestic help Khemraj. Convicting anyone of them on the basis of circumstantial evidence was a tough job.

The film shows, the Noida Police and other investigation officers bungled the case.The film also explores the different possibilities that could have solved the Arushi murder mystery.The movie lays out the detailed account of the Talwar double-murders. The movie delivers angry look at the horrifying mishandling of the case and justice.Its a suspense and thriller movie and the audience becomes the detective alongside Ashwin.This fact-based Indian drama movie is further enhanced by the smart plotting and star power.

Irrfan Khan is terrific as Ashwin.His impressive dialogues really held our attention and kept us on the edge of our seats. I must say he is a very fine actor. The performances by Konkona Sen and Neeraj Nabi are stellar.They capture the grief and frustration in their expressions.I also loved the performance by the trio of actors including Sumit Gulati ,playing the servants. Tabu also gave special appearance in the movie.

Vishal Bhardwaj has also composed the soulful music for Talvar. I loved these songs~ Insaaf, Patli Gali and Zinda

Talvar is dark, an eye-opening film and sharply scripted film. The writer has to stay objective to make sure Talvar remains neutral. Viewers know little about the real-life events that took place in Noida Aarushi Murder,and this movie brings the series of incidents on screenplay.well worth a few hours of your time. The movie will be releasing on October 2.Watch movie trailer HERE

Anmol said…
I like this review. You might wanna check what others critics have to say. People often face this problem when one critic says something and the other has a totally different opinion. Coincidently all critics concur in their opinion for this movie. Check out the webpage below where all reviews and other information about the movie is at a single place.