ONCE UPON AN IAS EXAM BY K. VIJAYAKARTHIKEYAN

BOOK BLURB:
Vishy’s worst nightmare—failing the UPSC’s Civil Services exam—has come true. He is plagued by insecurity, fear and doubts. The mother of all competitive examinations has rejected him and he needs a reason to live. So, what does he do? He tells his best friend Rithika, ‘I love you… Will you marry me?’
In Once Upon an IAS Exam, twenty-five-year-old Vishy tries to overcome the uncertainty and confusion about his future and figure out ways of convincing Rithika to marry him. Things turn even more interesting, funny and emotional as Vishy reattempts to conquer ‘Mount IAS’. As he tries to take his academic and love life towards safety, he seeks refuge in the world of IAS coaching centres.
Set in the bustling Civil Services exam coaching hub of Anna Nagar in Chennai, this book is a hilarious account of the actuality, stress and struggle faced by millions of candidates who prepare year after year for one of India’s toughest exams. Join Vishy as he sets out to prove his mettle to the world—and himself. Will Rithika accept the love of her best friend? Will Vishy overcome his sense of failure? Will there be a happily ever after? 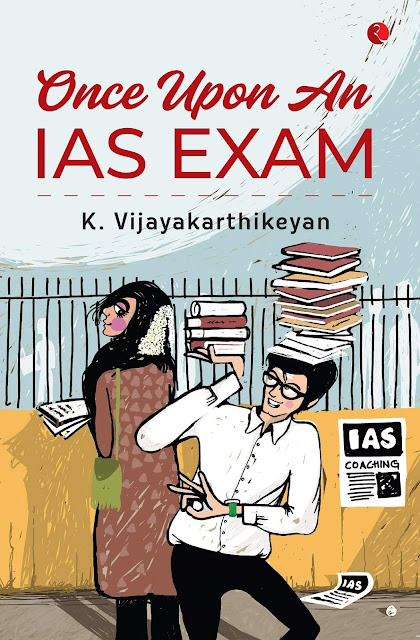 MY REVIEW:
Twenty-five-year old Vishy plays the protagonist in this book Once Upon An IAS EXAM authored by Dr. K. Vijayakarthikeyan. Vishy is a Mechanical Engineering Graduate from Chennai. He wants bigger challenges and a multi-dimensional future. He prepares for Civil Services Examinations but he fails in his UPSC Prelims. The resultant doubts and fears disturbed him. At this time he expresses his feelings of love to his best friend Rithika as he feels insecurity of loosing everything around him. But with the support that he receives from his ever understanding parents during his this tough time helps him in overcoming these feelings of failure and insecurities. Unlike many other UPSC aspirants who fall in depression after failing in this difficult battle of clearing Preliminary Exam, Vishy chooses to stay focussed on his goal and decides to reattempt the exams. Vishy analysises where he lacked in his preparations and makes a change in a choice for optional subject. Vishy doesn't let his fears and self-doubts grip him and he tried hard to find ways to overcome the uncertainty about his future and he also trues his best to win the love of his life. First he goes to all the IAS Coaching Centres to find more about them. A humourous and funfilled journey follows when he comes to know how these coaching centres tries to attract the students with the fake pictures and other hilarious taglines. He also finds out how these coaching centres fees are too high and how they are milking money from the aspirants. They charge these innocent and fearful aspirants exorbitantly. Finally after doing a good research, he joins Great Minds Coaching Centre where he becomes friends with Vinod and Ashok.
Rithika tries to help out Vishy as much as possible for her in making his dream come true. To know whether Rithika will accept the love of Vishy or not, will Vishy overcome his sense of failure or not, you'll have to read this book.

WHAT I LOVED THE MOST IN THIS BOOK:
Vishy was taking one step at a time and enjoying the whole process of preparation with a fair amount of confidence even though he had lost out on his previous attempt in the preliminary exam.

I liked the attitude of Vishy which I feel is what every student should have.  As they rightly say...
"Attitude, not aptitude, determines your altitude!" I also appreciate his Self-belief which makes him work hard towards fulfilling his dreams.

The unconditional friendship between Rithika and Vishy is what I really liked. I was really touched after reading how Rithika goes out of the way to help Vishy when he misplaces his exam ticket. How she waits for him outside his examination hall while he was writing exam. All these cute incidents makes this story even more interesting!

I also liked the secondary characters like Rithika's colleagues like Badri, Sid and Harini and Dharini. They also proved to be really good friends. These characters are inspired from realistic characters. I would say that the character of Babu will definitely inspire you ( You'll know this once you will read the book).

DO I RECOMMEND THIS BOOK?
This is a fast-paced book and hilariously narrated. You'll enjoy reading every page. I found the book cover really interesting and creatively designed. I liked the title which is apt. The language used is simple. This is a must-read for all the IAS aspirants and other students who are preparing for any exams. Every student can get a lesson from this book. It's a hilarious yet very inspirational read, a story of self-belief and strong determination. The story which tells us how exams should be considered a part of life but more than that we should enjoy the journey of preparation. Most importantly, how our parents, our friends plays an important role in keeping us motivated all through our journey.

RATING: I could only give 5/5 STARS

You can order your copy from Amazon and this book is also available as an e-book.

Dr K. Vijayakarthikeyan is a medico turned bureaucrat currently working as commissioner, Coimbatore Municipal Corporation, and is the youngest ever officer to have held this charge. He is well known for his hugely popular initiatives as an IAS officer and has won several awards and accolades for his pioneering work in land, solid waste and urban management. He has authored three Tamil bestsellers, Ethum Doorathil IAS, Adhuvum Idhuvum and Orey Kallil 13 Maangai. On sunny weekends, he can be found wreaking havoc on the cricket ground with his explosive batting and deceptive spin.
Labels: BOOK REVIEW K. VIJAYAKARTHIKEYAN ONCE UPON AN IAS EXAM

Anonymous said…
Is this a real life story? First i thought that writer is vishy himself. But the writer is a medico and vishy a mechanical engineer
7 March 2019 at 17:18