Akshay Saxena, an out of work editor of a defunct literary magazine in the UK, is told to move to India for a year to help shore up the value of Kalim, an ailing Indian publisher.
Akshay finds himself in a job where he has to do the impossible. Angus Lee, the new owner of Thomson Lee Books, wants at least five bestsellers in the coming year, failing which the business would be wound up.
He has to find a way of making a success out of books he would never publish or would never even read. To complicate things further, he has to contend with motley crew of has-beens and misfits working for the publishing house as well as wannabe writers, dealing with their follies and derisive tactics, and battle his own affections for Zorah Kalim, the impulsive daughter of his former boss.
Will he succeed in bringing out that one ‘bestseller’ from his publishing house? And what about his own life and love in office? Find out in this riveting read. 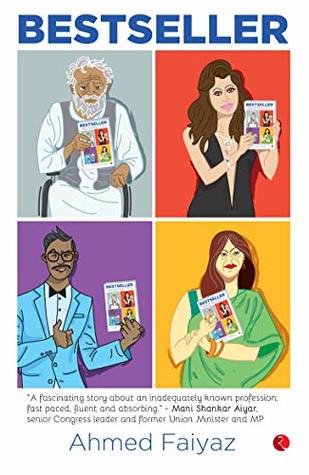 I picked this book because I wanted to read and know more about the life of publishers. And also because of the attractive book cover and eye catchy title. This book is a true account of life of people who work at publishing house. I used to think that life of publishers is easy and quite interesting too as they get to read lots of manuscripts by different authors and not just this they get to choose which story will see light of the day. But.....Noo.. I was totally wrong. After reading this book I now better understand that the life of publisher is between a rock and a hard place. This is a story of Akshay Saxena, an out of work editor of a defunct literary magazine in the UK, who is told to move to India for a year to sustain the value of Kalim, which is an decrepit Indian publisher.  Angus Lee, the new owner of the Thomas Lee Books, posed this challenge for Akshay and his team to at least bring five bestsellers in the coming year and if this target was not met then this business would be wound up. He falls in love with Zorah Kalim, daughter of his former boss. They both try their best to make this impossible target a reality. And what follows next is a hilarious journey of how Akshay deals with the different types of authors who are not just authors but celebs, politicians, models and what not. They all eat his brain to read their stories and make them bestseller anyhow. Some of the authors focus less on quality content and more on making their book a huge success. How Akshay deals with these funny authors and other problems of achieving his target of bringing bestsellers from this publishing house, you'll have to grab this book. I absolutely enjoyed reading every page of this book and what I liked reading more was how Authors just want positive reviews from Bloggers :D.