The name ‘Karmic City’ is used in the same sense that Walt Whitman calls himself a “Kosmos”. In fact each of us has three Cities within us – that of Lord Brahma, Lord Vishnu and Lord Shiva. This book uses the genre of fiction to acquaint us with the gist of ancient Indian wisdom. The reader is taken step by step in easy stages so that as the story unfolds, answers come forth to the most profound questions about life, death and re-birth.
A group of people with marked human foibles and assorted emotional baggage meet and thereafter agree to meet frequently on finding that they have something to gain by it. They are at different levels of consciousness, but one of them is a highly evolved seeker of the spiritual life. He is referred to simply as the “Soul”. All the others have names emphasizing their individuality. Only the “Soul” has so gained in spirituality that he has realized that he is one with the rest of creation. He is clairvoyant and the others accept him as a sort of guru. Yet he is also a seeker and proclaims that he is not a guru. The first and subsequent meetings with him alter the lives of all the other characters. 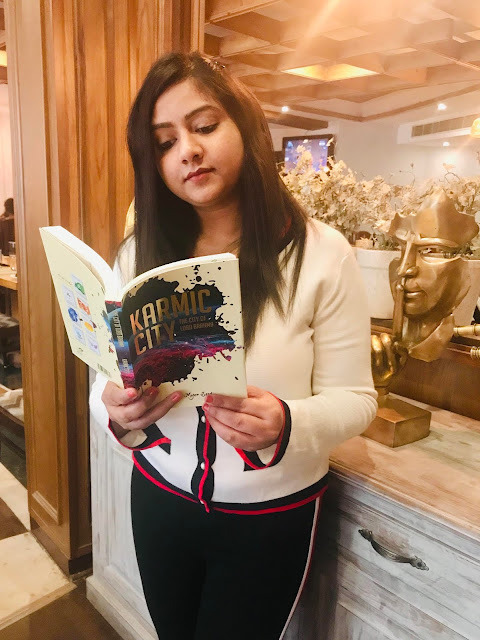 Aditi and her husband Virat, Vaidehi and her husband Karthik are residents of a calm and peaceful locality; one fine day a person who identifies as ‘Soul’ reaches this locality and intrigues Aditi from their first meeting. Aditi who is a spiritually inclined person gets excited to meet Soul and hence starts discussing with Soul her doubts only to realize that she has a lot to learn. Through Aditi, the other three people also meet Soul and each of them have a different experience interacting with Soul based on their own understanding of their physical body. How Soul helps these two couples in their spiritual journey by discussing these heavy concepts in words easy to relate for each of them is what Karmic City is all about.

The first book in the trilogy – The City of Lord Brahma discussed about the auras surrounding our physical bodies and the connection between physical body and the soul of light. The author also includes some very intriguing poems which are easier to read and understand than plain prose. The book is divided into different parts and chapters as per the info that is being shared, to make the journey easy for the reader. The author has in-depth knowledge about the workings of human body beyond what meets the eyes and presents it in a very impressive conversational format, while weaving a story around fictional characters for making it easy to understand for novice readers who are reading spiritual stuff for the first time. 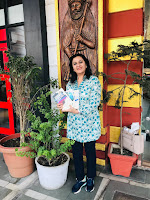 Hema Myer Sood released her first book at 29. The Eternal Ocean of Brahma depicts the wisdom of the Bhagavad Geetha imbibed through intuitive perceptions of the waves of the ocean. She received notable reviews and was compared to Newton and Archimedes for her unprecedented perceptions. Another two books successfully followed within a few years.
Two decades later, The Karmic City trilogy was released in the genre of New Age Philosophy. Karmic Cords is a poignant narrative of the author’s personal loss of her only sibling.Her foray into historical fiction interwoven with New Age Philosophy created a unique thriller- The Crown of Tijara which will be released in 2020.