BOOK BLURB:
What does Kali Yuga hold for us? An enthralling tale of many centuries ago, set in the mythical land of Shivpuri in the great Himalayas, Kali Yuga: The Ascension, sets out to answer this question. Guru Parshuram, guide and leader of the five outcast clans of the Rudra Sena—Him Manavs, Bhuals, Aghoras, Nand Garajnas and Agneyas—prepares for the prophesied reincarnation of Lord Anjaneya in one of the clans. What follows is a rollercoaster ride that takes you deep into a mystical, magical world of honour, valour, bravery and self-sacrifice, as the timeless clash of good and evil unfolds. 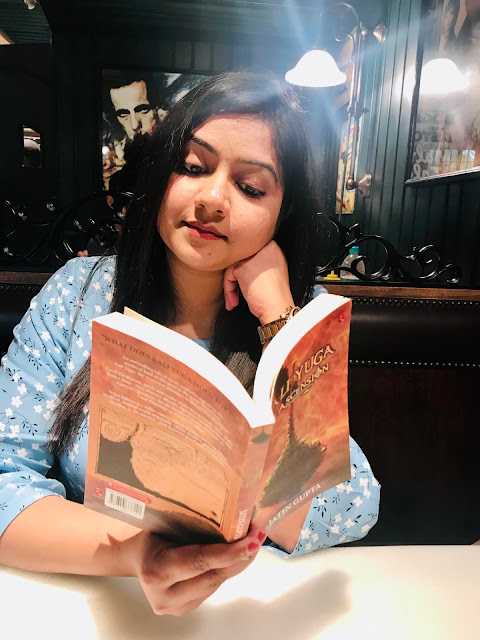 While moving out of his current avatar, Lord Anjaneya secured his weapon under the protection of Guru Parashurama to be handed over to the rightful owner when he takes his next avatar. The Rudra Sena alliance formed of the five outcaste clans were given the responsibility to protect this gada which was secured by Guru Parashurama in the Mahashakti temple. The Anjaneya Sena were appointed as the guardians for this temple and only the next avatar of Lord Anjaneya could lift this gada during the Rang Bhoomi event. Bheem the prince of Shiv Puri and son of King Vajra was preparing for the Rang Bhoomi event for the year with every intention to claim the Mahashakti gada this time. Little does he know that he would have competition from his kid brother Dheeish. Who will be able to proclaim themselves as the rightful owner and the next incarnation of Lord Anjaneya forms the rest of the story.
This is a mythological fiction which has known character names from Hindu mythology and epics. The use of some known hymns and liberal usage of Sanskrit words adds charm to the story. The elements of fantasy like shape shifting ability and exotic landscapes are vividly described by the author. The five clans of the Rudra Sena are well differentiated by the author with distinct physical qualities, so are the various cities, with elaborate descriptions of their geographical features; even the animals used by these clans as mode of transportation are well imagined by the author.
The characters so as the action sequences keep the reader on edge. The author intelligently rolls multiple genres into one story with fantasy, mythology, blending seamlessly to give the reader an out-of-the world experience. A must read for all those who are on the lookout of impressive mythological fiction stories in the Indian context with a add sense of fantasy.

Ventus said…
Great article! Thanks for sharing this with us.

Check us out at Tropika Club Magazine

Tropika Club Magazine is your leading online magazine for the discerning male and female Singaporean. We cover various topics of interest, ranging from beauty and vogue for her, and grooming and style for him, as well as city and destinations and top picks.

To learn about Tropika Club's Search Directory for Beauty and Wellness Services, please click on this link

Check out a sample of Tropika Club Magazine’s articles:

1. What's Most Effective for Wrinkles Under the Eyes?

2.How to care for your hair between Salon Visits