IN CONVERSATION WITH AUTHOR SUJATA PARASHAR


Team Vinfluencers managed to grab a quick word with Sujata Parashar, Author of the book 'THE TEMPLE BAR WOMAN" for a short interview.

ABOUT THE AUTHOR:
SUJATA PARASHAR is a popular Indian novelist, short-story writer and poet. She has written seven books so far including a poetry series and a short-story collection.
Sujata holds a Master's degree in Human Rights. In 2016 she was presented the prestigious Karamveer Chakra Award-instituted by iCongo (instituted with UN) conferred to individuals who bring about positive social impact in the lives of people and planet.
The Temple Bar Woman  is her fourth novel. 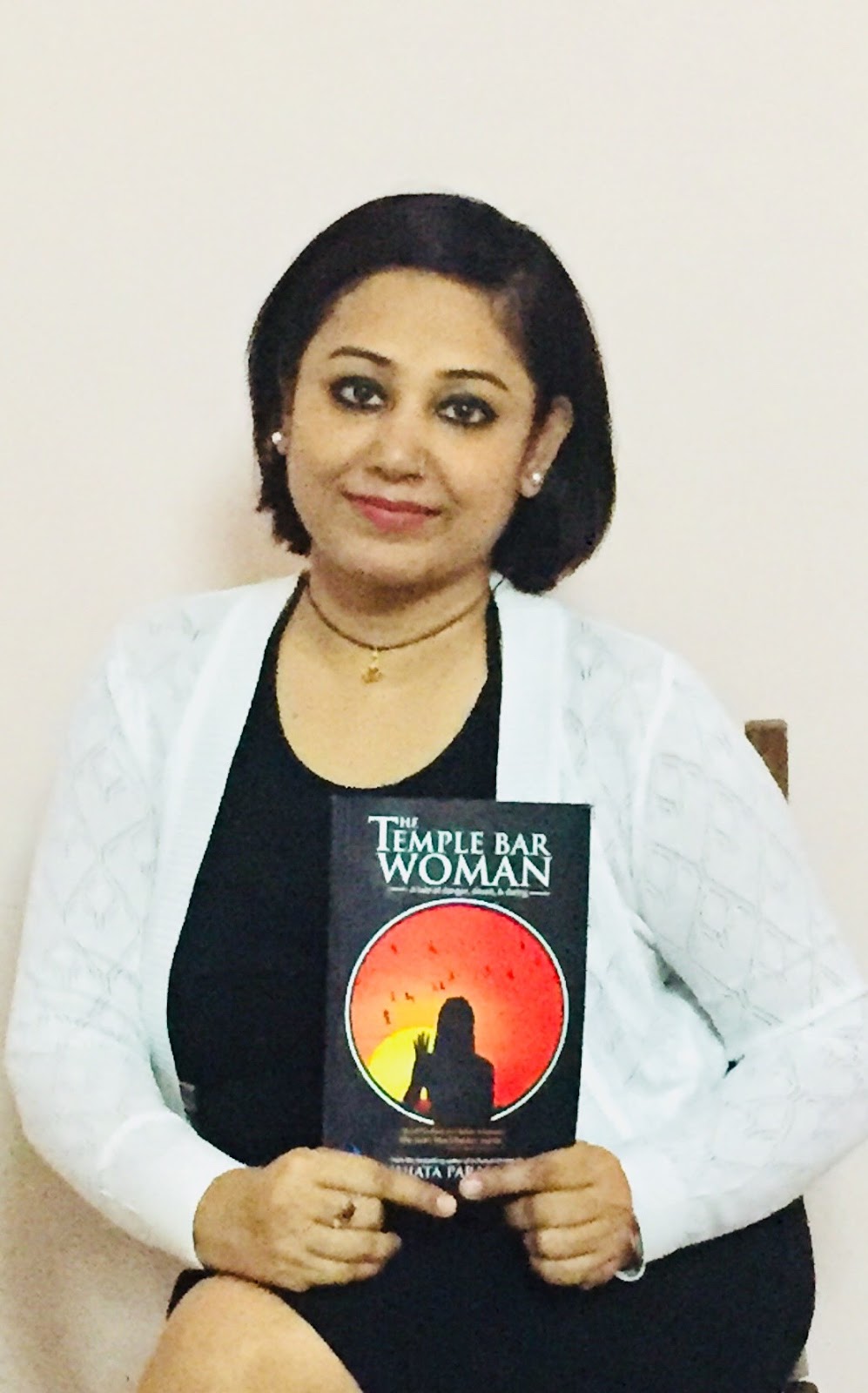 Q. WHAT INSPIRED YOU TO START WRITING?

A. I started writing by chance. I was not aiming to be a writer. But I’m an expressive person and probably my first book happened because I wanted to question/ explore a hush – hush topic from a woman’s point of view. It was during a social project which involved interviewing a group of marginalised women; that I got the idea for my first novel, ‘In Pursuit of Infidelity.’  Actually, in the beginning it was just a scribble which I thankfully did not delete. I recall how every evening I would come back home and add to my casual jottings; till a point when I realised that it was turning into an interesting story. At first, this was meant for self-consumption and to share with close friends. However, halfway through the manuscript I decided to approach a few publishers in Delhi I was familiar with. I sent out a basic mail to almost 15 to 20 publishers. Most of them sent me a polite rejection and some didn’t even respond. However, two of the publishers out of the lot showed keen interest in my half - finished manuscript and one of them was Rupa and co. Since Rupa was not only better known and bigger among the two and gave me a good offer, I went ahead and signed the contract with them. The book became a bestseller and propelled me into the world of writing.

A. I’m a curious person by nature. I like to read anything and everything that arouses my interest. It could be a fiction or a non – fiction. However, I’ve a soft - spot for fiction, especially genre fiction.

Q. WHAT IS THE GREATEST CHALLENGE IN WRITING A BOOK?

A. Like any task, writing a book requires you to be disciplined and consistent in your efforts. But since this is a creative work and requires your full concentration; the biggest challenge for a writer is getting down to writing on a regular basis. One needs to keep a clear mind and be focussed, and self – motivated.

Q. HOW DID YOU COME UP WITH THE IDEA OF WRITING THE TEMPLE BAR WOMAN?

A. I don’t remember the initial trigger now since I started writing the book somewhere in early 2011. However, I recall how I’d discussed the idea and sent the initial (and incomplete) draft to my then publisher who advised me to drop it at that time as I was still finding my feet in the writing world. I saw some merit in his guidance and so shelved the MS and instead started writing my third novel – “In Pursuit of a Lesser Offence.” In December 2012 the brutality of the Nirbhaya gang – rape case enraged the whole nation. When Jyoti Singh Pandey aka Nirbhaya succumbed to her injuries and passed away, many women living in Delhi and elsewhere grieved alongside the young physiotherapy intern’s family. It was like a personal loss to them. I could not stay unaffected either. That is when I revisited my all – but - forgotten and incomplete script and started writing again. This book is a tribute to the fearless survivors of sexual violence. It is also an attempt to get people talking openly about the issue of sexual assault and rape, which, I feel, has been neglected and ignored far too long in our country.

Q. WHERE DO YOU GET YOUR IDEAS FOR YOUR BOOKS?

A. Ideas don’t come when you’re trying to force yourself to think. They happen when you’re sensitive to your environment. Or when you find yourself wanting to respond to a particular thought or action initiated by others that is disturbing or exciting you. For this, one has to be a keen observer.  A good observer will have plenty of ideas. The trigger in case of my books written so far, was my need to express my thoughts about issues or subjects that compelled me to either study or explore them further. Of course, as a storyteller, I’ve always tried to keep my stories engaging and entertaining.

Q. WHAT WAS THE BOOK THAT MOST INFLUENCERS YOUR LIFE--- AND WHY?

A. There so many of them and all for different reasons. I loved reading Gandhi ji’s ‘My Experiments with Truth,’ for the simple and yet profound life - lessons (based on his own experiments) he humbly and honestly shared with us. I’ve enjoyed Elizabeth Gilbert’s Eat, Pray and Love for showing the author’s inward journey to seek peace and happiness through her solo – travels. I was greatly inspired and touched by the poems of Maya Angelou and later by her personal story of hardships and triumph. I’ve admired Kamala Das for her fiercely feminist and courageous voice reflected in her various poems. I also enjoyed reading non – fiction books like, Outliers and other books by Malcolm Gladwell, Flow by Mihaly Csikszentmihaly, and Working with Emotional Intelligence by David Goleman...the list is long. However, all the books I’ve read so far have only enriched me and added to my knowledge and understanding.

Q. GIVE US THREE "GOOD TO KNOW" FACTS ABOUT YOU. BE CREATIVE. TELL US ABOUT YOUR FIRST JOB, THE INSPIRATION FOR YOUR WRITING, ANY FUN DETAILS THAT WOULD ENLIVEN OUR PAGE.
Q. WHAT ELSE DO YOU WANT YOUR READERS TO KNOW? CONSIDER HERE YOUR LIKES AND DISLIKES, YOUR INTERESTS AND HOBBIES, YOUR FAVOURITE WAYS TO UNWIND--WHATEVER COMES TO MIND.

A. I have enjoyed swimming from a young age and am a good swimmer. My brother and I both were trained by my father. My brother has even represented his school in the Nationals and was covered by the local media then. I had also given my name for the Regionals but since no other girl was going from our school, I had to drop out. My father was himself a great swimmer and shooter. He still is. I also love doing yoga, and again, initially I learned it from my father.  However, my mother (she has a royal lineage) instilled in me the values of simplicity, honesty and humility. I wear my heart on my sleeve and enjoy simple things in life, like, going out with friends, spending time with my son, watching English classic romance movies or listening to good music. I’m a foodie but dislike cooking.

Q.WHILE RESEARCHING THE BOOK THE TEMPLE BAR WOMAN, DID YOU ACTUALLY WENT TO PLACES DESCRIBED AS IN TEMPLE BAR AND MET SUCH SIMILAR CHARACTERS LIKE SEX WORKERS? IF NOT, HOW DO YOU GET YOUR INFORMATION?

A. Yes, I went to G.B Road in Delhi, another city in India and Geylang in Singapore to study and interview sex workers. I read books and watched movies related to the topic. One of the notable books I read during my research was The autobiography of a sex worker by Nalini Jameela. I also tried to find out as much as I could about the aftermath of rape and sexual assault on a woman’s psyche. While almost all that I‘ve written and created (while describing Temple Bar) is from my own imagination, my visits and the talks that I had with the targeted - women helped me give my characters and their environment an authentic feel. Also, politics (as a subject) was a blind corner for me. And I faced many a hurdle (while writing section III) in trying to confirm and reconfirm smallest of details by researching and enquiring from friends.

Q. THERE IS ONE CHARACTER IN YOUR NOVEL, RAKSHIT SINGH, DO YOU THINK SUCH MEN EXIST IN THE REAL WORLD?

A.I believe the world is full of such people. Both men and women.  And (as I read somewhere) - if you can’t find one then be one.

Q. WHAT's NEXT AFTER THE TEMPLE BAR WOMAN?

A.My long pending ‘pursuit.’ I mean the 4th novel in my ‘pursuit’ series. It’s going to be a light - hearted romance. ☺

Q. WHAT MESSAGE OR ADVICE YOU WOULD LIKE TO GIVE TO YOUR READERS?

A.Love yourself. Be true. Keep smiling and spread the smiles. ☺

Read and Loved your frank answers. Also feel proud that you have chosen to write on women issues. I have read all your books except Temple Bar women. In all of them, find the today's woman struggling to be bold, yet wanting to be acceptable. They truly portrays the emotions and is very relevant for reading today. Keep on writing. Best wishes
10 April 2018 at 03:25