The year is 2118. The first journey from Earth into interstellar space has been successful, but the explosive secret carried aboard the probe Voyager 1 will have grave consequences.

As Captain Anara and her crew return to Earth aboard their spaceship, Antariksh, civil war breaks out in the world they have just left behind. A cryptic message warns her of the dispatch of mercenaries to Earth. Their mission - unknown but deadly. She may have just days to prevent the outbreak of an interstellar war which would bring unimaginable carnage to Earth.

Her crew and the National Investigation Agency, engage in the greatest undercover search for the mercenaries in the streets of the megacity. As they race against time to uncover the plot, a traitor is unmasked, and Anara herself comes under suspicion. She must use every ounce of her resourcefulness to protect thirty million people and one unique, innocent life.

Immerse yourself in an edge of the seat techno-thriller on a realistic future Earth and geek out on the technology just a few decades away from today. 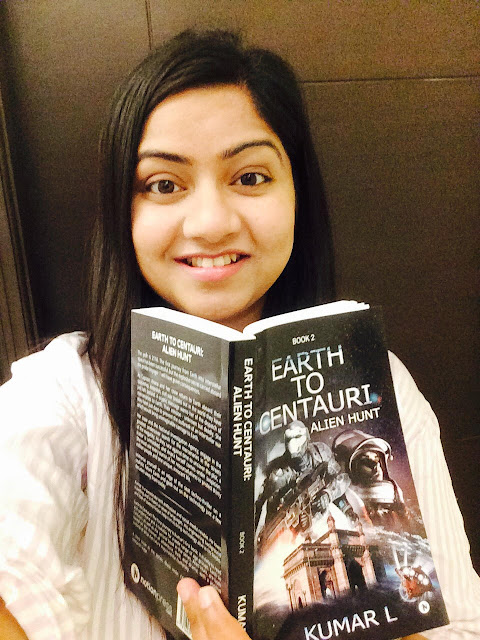 After spinning its wheels in Earth to Centauri, Book 1, Kumar’s novel becomes a chilling tale that’s hard to shake. The exuberant characters and swift pace, this book has more to offer than Book 1, while in that it was just about giving ideas to the readers more like plot building and educating readers with the various astronomical terminologies and how things works. Such meticulous research, such love for all things geek, an exhilarating plot, breakneck pacing and phenomenal concept of space Opera. This book has an edge of the seat action.

It's got everything you need in a great science fiction, like the space opera concept which is new to Indian Literature, this is full of action/adventure, joyous moment, greediness, One can see how the future is going to be in the earth, advanced technology, how teamwork is a great formula in destroying the evil. With the tremendous pace you just wish to go on reading. The science with the techno thriller is decent for the plot to make the story credible and interesting.

Overall, an another Sharp mystery in a continually improving series. The book itself is a simple delight to read. The story is well paced and keeps you riveted from cover to cover. I can't just wait to read Black Hole: Oblivion.